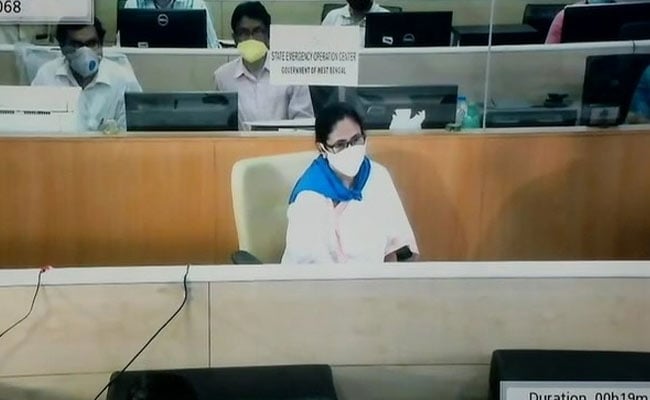 Mamata Banerjee said the seven districts on alert had enough masks and sanitisers.

Bengal would monitor “red plus zones” for Cyclone Amphan, which is likely to hit the state tomorrow afternoon, Mamata Banerjee said today, reviewing arrangements at a control room set up in her office building in Kolkata.

Three lakh have been moved to safety from the seven districts in the most vulnerable zone of Bengal, the Chief Minister said. “I will stay overnight in the control room tomorrow,” she announced to reporters after visiting the control room.

Amphan, one of the fiercest cyclones over Bay of Bengal in years, is barreling towards the Indian coast and is expected to pack winds gusting up to 185 kilometres per hour when it hits Bengal.

Mamata Banerjee warned people near the cost against stepping out and said they should stay in from Wednesday morning until an all-clear was sounded on Thursday.

“The tail-end of a cyclone can do worst damage, so people should not come out of their homes until they get an all-clear,” she said, recalling that when Cyclone Fani hit last year, more died when the cyclone was leaving.

“The storm has three parts, the head, the eye and the tail. Don’t think the storm is over when the eye passes. Wait till the tail also crosses your district.”

The number of people moved to safety is almost three times the number evacuated during Cyclone Bulbul, which struck Bengal in November.

The mass evacuation has been challenged by the coronavirus infection and the need for physical distancing and other precautions.

Ms Banerjee said the seven districts on alert had enough masks and sanitisers.

“I am worried about migrants arriving in the bad weather. Special “Shramik” trains should not come to Bengal till Thursday due to the cyclone,” Ms Banerjee said.

This morning Home Minister Amit Shah, in a phone call with the Chief Minister, said the centre would give all help.