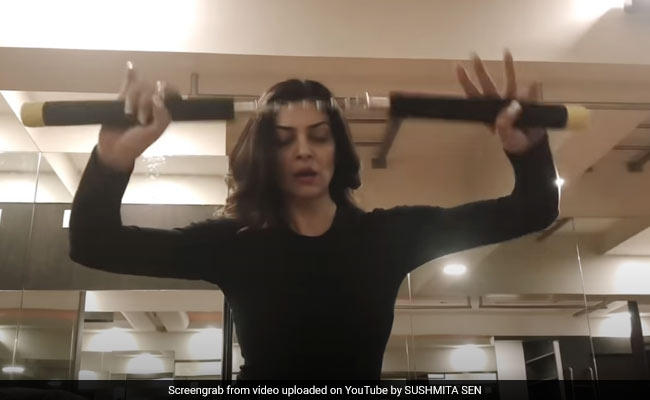 Sushmiat Sen in a still from the video. (courtesy: YouTube)

Sushmita Sen, a fitness enthusiast, posted another post on her official YouTube channel and shared an inspirational story along with it. In her post, Ms Sen talked about how she “meditated” with Nunchaku (a Japanese martial arts tool) to overcome a chronic disease. Sushmita Sen, revealed in her post that she after she was diagnosed with an auto immune condition called Addison’s disease in 2014, it was extremely “tiring” for her. By practicing with Nunchaku, the actress found a way to strengthen her body. Sharing a recent video from herself practicing with nunchaku and wrote: “Enough was enough, I had to find a way of strengthening my mind, allowing my body to follow suit. I meditated with Nunchaku. Aggression out, fight back in and pain turned into an art form. I healed in time, my adrenal glands woke up, no more steroids, no withdrawals and no auto immune condition as of 2019.”

The former beauty queen began her post by writing: “After I was diagnosed with an Auto immune condition called Addison’s disease in September 2014, it left me feeling like, I had no fight left in me…A fatigued body filled with immense frustration and aggression. The dark circles under my eyes can’t even begin to explain the dark times I endured for 4 long years. To have steroids substitute cortisol and to live with its innumerable side effects took its toll. There is nothing more tiring than to live with a chronic illness.”

She signed off the post saying, “No one knows your body better than you. Listen to it. There is a warrior in all of us, never give up. Thank you to my teacher Nupur Shikhare for being my rock through this journey. I love you guys.”

Check out her video here:

Sushmita Sen was crowned Miss Universe in 1994. She made her Bollywood debut in the 1996 film Dastak. She has featured in films such as Biwi No 1, Do Knot Disturb, Main Hoon Na, Maine Pyaar Kyun Kiya and Tumko Na Bhool Paayenge and No Problem.