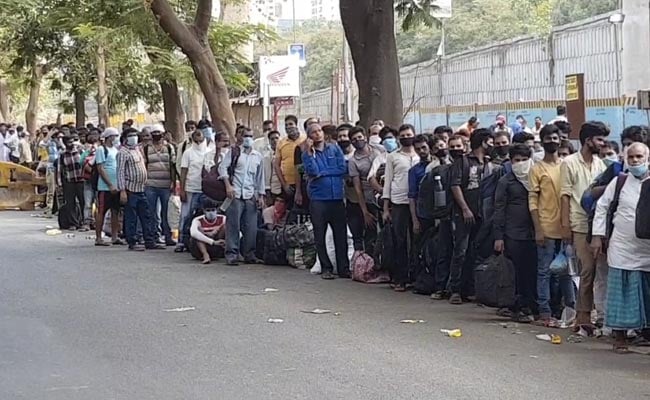 People stood for hours as the queue progressed by inches. It was a 1.5 km long line.

A seemingly never-ending queue of migrants stood at a bus station in Maharashtra’s Thane on Monday, waiting for their chance to go home. It is a wait that stretches interminably, with only 22 people allowed in each bus.

Men, women and children stood for hours as the queue progressed by inches. It was a 1.5 km long line.

“I have been here since 10 pm,” said one migrant, sitting on the footpath but carefully guarding his spot on the line.

To him it seemed like he had moved only a few metres in the past hour.

“I need to go to Jaunpur,” said the man, explaining that when he did get a bus for Madhya Pradesh, he would be dropped off at the borders, from where another state administration would take over and facilitate their journey to their village.

The migrants have to record information including Aadhaar card details before they can be assigned a bus to take them home.

“I came last evening after I heard that buses had been arranged to take us,” said another migrant, his face and head mostly covered with a scarf.

Their desperation has increased with the country moving to the fourth stage of the lockdown enforced on March 25.

With the lockdown extension yesterday, more crowds were seen walking on the highway, after which the police in Thane stopped them and directed them to the bus station.

Maharashtra has the highest number of coronavirus cases in the country – 33,053 — and was one of the first to announce extension of the lockdown. Mumbai, next to Thane, is the worst hit among metros.